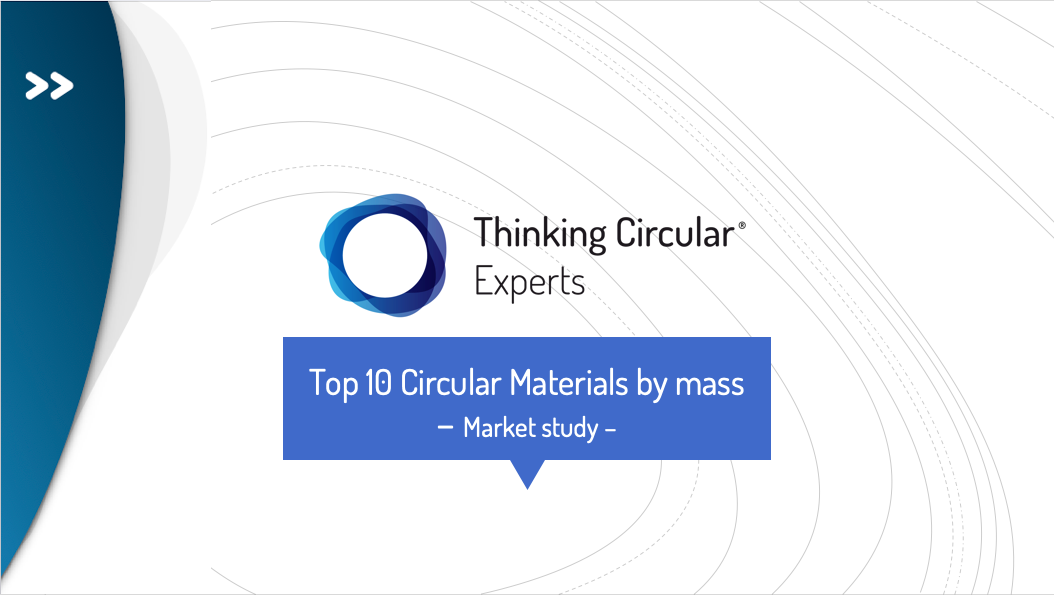 08.2021 How circular are the circular materials of the world really?

Posted at 14:12h in News by Jutta Bruns 0 Comments

The top 10 Circular Materials by mass

Do you know the world’s largest material flows that are managed in a circular way? For Thinking Circular®, this question comes up more often as part of our consulting work. That’s because companies turning to the Circular Economy want to know exactly what the effects of adopting a circular economy are, and what the benefits are to their business and the environment as a result. Looking at the most successful materials that are managed by people in a circular way can provide information about this. That is why Thinking Circular® has taken up this question. Two studies, on the TOP 10 and BIG 5 circular materials, now offer insights into the industrial development of the Circular Economy from a systemic perspective and the opportunity for critical reflection. After all, the industrial success associated with it for the Global North has downsides in the Global South of our planet and also contributes to climate change. The studies therefore conclude that there must be no uncritical development of the Circular Economy. Reason enough to take a look at both studies.

The current flooding events in Germany and Europe, which unexpectedly replaced the droughts of recent summers, paint a clear picture: climate change has also arrived in Germany. At the same time, questions arise as to what reconstruction adapted to climate change might look like. Policymakers have identified the Circular Economy as the basic outline of an economic approach adapted to climate change. The principles associated with it should now help to ensure a good life for nine billion people on this planet. Against this background, we were particularly interested in what we can learn from the most successful circular materials, which were recycled and managed in a closed-loop system much earlier than other materials.

In search of the ten most circular systems

Our search began with what is extracted from our planet every year. Because every year, the unimaginable amount of around 100 billion tons of material is snatched from planet Earth and captured. Of this, 10% is managed in a circular fashion. This data is based on official data collected by the government and scientifically evaluated. We know much less from the global south of this world than from the north, because there the share of the informal economy is disproportionately higher. In the circular economy, it is even estimated at up to 80 percent. This rounded estimate helps to keep things in perspective. 40 percent of the total quantities recorded is water. Drinking, gray or black water that is made economically usable and treated before being returned to nature. 20 percent is biomass of agricultural origin. 15 percent are materials that we have examined more closely and ranked in terms of quantity. The remaining 25 percent consists of about 200 other materials surveyed worldwide for which data on reprocessing or recycling are available. Given that the European Chemicals Regulation alone lists around 2,000 substances, liquids and gases, and products or materials often represent a combination of the 2,000 substances, this is an incredibly small size. This tells us, first of all, that we still know almost nothing about circularity in our economy and that considerable research is needed.

The recycling rate is now the most widely used measure of circularity in the world. It is easy to record and statistically depict at the location of the recycling company and can be found in numerous congruent sources. It thus formed the starting point for our analysis work.

The individual materials and their circular maturity in the respective global region (broken down by continent) is mapped by scorecards. The scorecard was developed according to the objectives of the Circular Economy Toolkit, as used by the Ellen Mac-Arthur Foundation. The rating was generated from the findings of all sources and is a rigorous simplification made in functional form. Policy intervention types (circular economy legislation, such as the existence of circular economy and waste laws, product stewardship, design specifications, etc.), availability of recycling technology, market maturity and stability of the circular market, and public acceptance with reference to the value of the material, collection and recycling were considered. Other criteria of the RESOLVE principle, such as renewability of the raw material, reparability, the type of business model (e.g., sharing economy), or technical features for collection (such as the use of apps, track-and-trace, etc.) were not initially considered in this initial study. Instead, the findings were grouped into three categories, marked with traffic light colors of red, yellow, and green to indicate better/worse. As expected, the overall global score, derived from the individual scores by continent, showed a number of top spots with steel, glass, aluminum and paper. Surprisingly, large volumes for recycled asphalt, volumes of recycled plastic and rubber from tire retreading, and the other three ranks of copper (4 mt), textiles (0.03 mt) and cobalt (0.015 mt) ranked 8th-10th most circular materials by volume.

Basically, it is noticeable that the global South in particular scores worse than the global North in the assessment of circularity. The principle of taking raw materials from the global South, processing them industrially in the North, and disposing of waste that leads back to the South is supported by many sources. One reason is that the circular systems there are not yet highly developed, whereas in the Global North they have an industrial structure. The systemic view reveals that the most successful materials are part of the history of growth and the Anthropocene, so they have also contributed to the causes of climate change. However, patterns and differences also become clear, as do the facets of success:

Here, the example on road pavement recycling from Japan is worth mentioning. Japan started a coherent road surface recycling strategy more than 30 years ago and has strategically aligned all government activities with it. Today, the goal is considered to have been achieved. The industrialized country on a small area, with limited space as an island, recognized the limits of growth long ago. Yet it took more than 30 years to transform road rehabilitation into a circular system. The Japanese manage their limited space better today than 30 years ago and have become accustomed to recycled asphalt. Debris from old roads does not need more landfill space in Japan, leaving more room for nature. In the end, this can also be a contribution to species protection, which is an element of climate protection. The example of tire retreading tells us a lot about circular potentials and also about how firmly behavioral patterns of a throwaway society are coupled to individual goods. Here, the true bridges to the Circular Economy have yet to be built. Each retread reduces C02 emissions by 40 percent. But people are discouraged from retreading because they believe that they would be of poorer quality and therefore have safety defects.

And so the study first makes it clear where even closer attention is needed, for example in paper recycling. Paper fibers cannot be recycled endlessly and must be replenished with

longer fibers. In addition, the use of conventional inks and printing technology does not follow a cradle-to-cradle principle.

Rebound effects that brought about climate change occurred unconsciously. In order to understand the cause and effect relationship, it is essential to gain an understanding of how systems are created so that we can make conscious economic decisions that positively impact the climate and the environment.
You find our studies here.