Posted at 16:11h in Unkategorisiert by Jutta Bruns 0 Comments

About resilient earthlings, stewards of all things, who love, learn and seek good life

But before we describe this idea of man, let’s take a look at other ideas of man that were basis for other economic theories or social models. They allow us to draw a distinction. And to place it in a historical context and thus also embed it into the changing paradigms. This blog post is thus an introduction to the topic and an invitation to continue working on it together.

The starting point for our idea was Yuval Noah Harari. In his book “A Brief History of Mankind” published in 2015, he describes the development from Homo Sapiens to Homo Deus.

Harari explains how the human species was able to conquer the earth and how the age of the Anthropocene came into being. The Homo Deus described therein possesses quasi godlike abilities, with which he not only uses creatively, but also destructively. Harari rightly places the question where the religions and humanism have remained in all the creative power of Homo Deus. Are we still capable of believing in something good in order to also act well? The question is as fundamental as it is provocative, as general and old as it is challenging. And the description of Homo Deus offers a basis for delimiting our actions and turn the image of humanity into a new narrative. 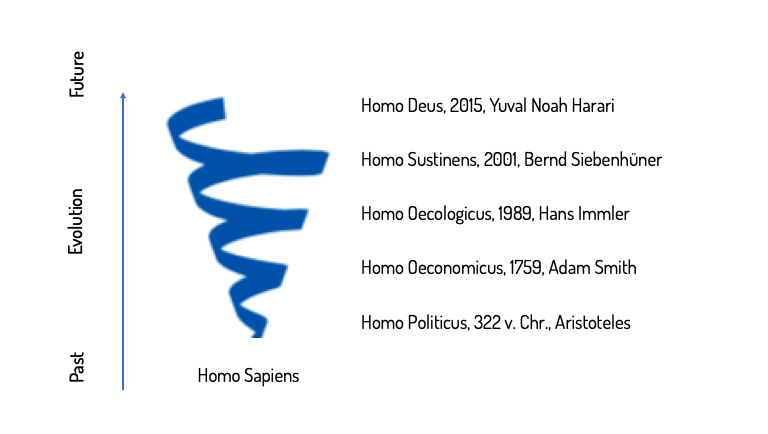 The series of ideas of man that have already been formulated helps us to develop the new description. Homo Politicus was described by Aristotle. Researchers such as Wolfgang Kullmann interpret this idea of man from ancient Greece as a social being that interacts in community. People can form communities on their own. Other researchers and interpreters of Aristotle’s work emphasize the human ability to think politically. Against the background of two social classes prevalent in Greece at that time, there was the challenge of bridging the differences of rights, opportunities, life possibilities and conflicts. The question of justice was a political one. Forming just structures became the object and has been a political one in nature ever since.

The image of Homo Economicus developed by Adam Smith assumes that people act and decide with a focus on utility. People act rationally; this has also been a result of the Aufklärung. Morality forms a context and framework in which the action takes place. This conception of man is criticized by alternative economists, since it excludes economic decisions oriented to the common good, although it is proven that humans have always decided in the sense of the common good. This was already stated by Aristotle, because political action is oriented towards the common good as well.

Industrial ecology gave rise to Homo Oecologicus, which described the idea of a perfectly ecologically acting person, but did not imply economic motivation and justice. Against this background, Homo Sustinens emerged. In this idea of man, moral responsibility is as significant as social learning, altruism, cooperation and communication. Ecology, social issues and justice are interrelated, form the sustainability triangle and are thus linked to this idea.

On our way to Homo Circularis, we want to consider how paradigms are currently changing. Paradigms describe beliefs of various relations in systems such as the relation of human to nature, human to human, human to technology, and identity issues.

In the Anthropocene, now that we are becoming aware of the connection of human actions to climate change, it is becoming clear that we cannot see nature just as a resource to be exploited, as described for Homo Deus. Science can lead us back to nature and a new understanding. We are currently learning that animals have all the characteristics that were assigned only to humans in the old ideas of man. Animals act socially, they have feelings, express themselves and they are rational – therefore they act strategically and they communicate. Furthermore, we recognize that every living being, no matter how small, has a function in maintaining the biological cycles that form our basis of life. These findings prove that humans and animals are fellow creatures on the planetary spaceship Earth. For this the term earthling was already established. Homo Circularis understand themselves as fellow creatures, as earthlings.

Our relationship to technology is also changing, at the same time becoming more intense and bringing in new dependencies as people connect with it more and more, even physically. The individualized cell phone is a metaphor here for what we still see: People carry technical spare parts inside themselves, like pacemakers or hearing or optic nerve implants. People are turning themselves into human-technology hybrids, implanting keys or payment chips in their limbs. There is certainly room for interpretation here as to how this physical connection is to be seen. Is technology an end in itself or a tool to make our lives easier? The field for answering this question is open. We are happy to stipulate here that Homo Circularis recognize and use technology as a tool.

Our daily actions gave and give us an identity. We are what we do. Rehearsed behaviors, tradition from religions, tied to space and time, shaped us for centuries. Rapid changes in our environment and behavioral adaptations from living in other places, in other cultures change our self-image. “Who am I?” This question arises for every person who changes. Every time we change, also forced by changes in our environment, we need a redefinition of our self. This is something that everyone can only find for themselves. Psychologists can confirm this for us. And it is the “I-narrative”, the individualized, own narrative, that defines us. The importance of narratives becomes easier for psychologists to observe and use therapeutically in times of social media. And we can also use this insight for the self-narrative of a Homo Circularis, who also narrates himself individually, but also sees himself as a social collective interacting with his fellow creatures.

There are more changing paradigms, e.g., gender issues, family images, democracy development. Homo Circularis do not see themselves as predominant, but in a diverse society as an element of social systems, as system theory can also depict. Communication among the elements is an elementary link and is also expressed in Hartmut Rosa’s theory on the need for resonance in human beings. 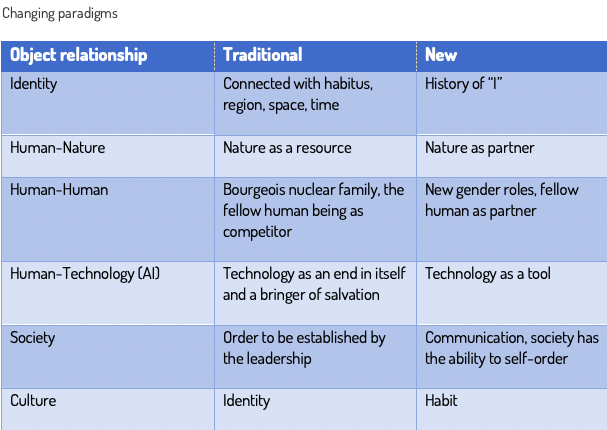 We hold on to what helps us with changing paradigms from the knowledge of earlier ideas of man:

But what is missing?

Man’s striving for perfection in the respective ideas of man raises questions about the Good Life. What happens to a society that is constantly stuck in rate race ending up in depression, stress, cynicism,and frustration and that forgets to be happy due to sheer survival perfection? Can Homo Circularis be oriented to the above-mentioned human ideas with regard to the results of human striving? We don’t think so. And the question about the “good life” about what is really important has already been asked.

As reflective and systems-thinking subjects, Homo Circularis will always ask themselves the question of what is really important. Especially when we lose something. Climate change will cause losses: people will lose their homes because they are no longer habitable, they will lose their possessions, they will lose people they love. Possessions will then take on a new meaning. Thus the Homo Circularis makes himself more and more the steward of everything what offers him a basis of life: of things, of nature, of people…. He will use possessions, but they will no longer matter to him. Possessions do not per se justify survival neither a good life. This will be a new experience.

Homo Circularis have to adapt quickly to new environments, so their only option is rapid lifelong learning. And if they want to ensure the survival of their children, they have to pass on their knowledge quickly. While we’re talking about children: What about love and feeling? The preceding pictures of human beings almost completely ignore this, and yet it is part of our emotional intelligence. We learn primarily from emotional experiences. Homo Circularis is emotionally intelligent.

We will see that Homo Circularis in their quest for the good life, will act as stewards and yet do what Homo Sapiens have always done: Love, learn, teach, and act quickly for survival. To prove themselves resilient.

Who benefits from the image of Homo Circularis? In demarcation to Homo Oeconomicus it is certainly useful for the own reassurance of worried thinkers and alternative economists. Because our current programm for higher, faster, stronger has overshot our save operating space on earth. Otherwise, the Anthropocene would not exist.

If we ask “Who benefits from climate change?”, then it is clear that it does not benefit us humans, it threatens our existence. But perhaps the knowledge about climate change could be of some use to us after all?

This includes recognizing that the Darwinian paradigm is a cause of the climate change. Because in the idea of the STRONGER will be always winning, Homo Deus offered a legitimation for avarice, greed and narcissism, in the exploitation of our planet. There is no such thing as THE STRONGER. However, there are systems that are planetary in scale. Neither do we humans know the rules of the planet, nor can we control them, nor should we presume to attempt what Homo Deus attempts. Man is only one element in these systems.

So, it’s time to finally say goodbye to Darwin’s paradigm. In climate change, those who survive will be those who are good at cooperating, learning quickly, and proving emotionally and socially resilient. Perhaps it will be the Homo Circularis who adapts to the new and survives.